What Happened in Arizona?

In 2010, Arizona Governor Jan Brewer signed into law bill HB 2281. This bill effectively banned ethnic studies from being taught in schools under the auspice that programs such as Mexican American/ Chicano studies “promote resentment toward a race or class of people” and/or “advocate ethnic solidarity instead of the treatment of pupils as individuals” (HB 2281).

This bill was signed shortly after HB1070, which gave local law enforcement privileges of screening individuals suspected to be undocumented. Sheriff Apraio from Arizona has recently been charged and found guilty of contempt for refusing to stop targeting Latinos in his law enforcement practices, and was pardoned by President Donald Trump in August 2017.

On August 23, 2017, this bill was described by Judge Tashima as “racist” and overturned.

For More Information about HB 2281 and Responses to It:

The Battle for Mexican-American Studies in Tucson

For More information about Sheriff Arpaio:

A Guide to Joe Arpaio, the Longtime Sheriff Who Escaped Strife

What Happened in Texas?

Educators throughout Texas have been attempting to add, where it did not already exist, Mexican American and Chicano Studies content to their curriculum. However, no state-authorized textbook existed that could meet the demands of the entire state. A controversy arose when Mexican American Heritage was put forward. The authors, with no knowledge or expertise in the fields of Ethnic, Latino, and/or Chicano Studies, created a series of racist statements and misinformation. Examples include calling Mexicans “lazy” and describing Chicanos as individuals who “opposed Western civilization” (Mexican American Heritage). The Texas Board of Education voted against the use of this textbook on November 16, 2016. Had it not been voted down, it would have entered the statewide curriculum.

Latino educators in Texas have taken the opportunity to create their own textbook that can be utilized in both in-class and online settings. This alternative textbook features overviews and content that exemplifies the kinds of contributions that Mexicans, Mexican Americans, and Chicanos make to not only Texas but the United States as well.

Below you can read MALDEF's (Mexican American Legal Defense and Educational Fund) response to Texas SB4. 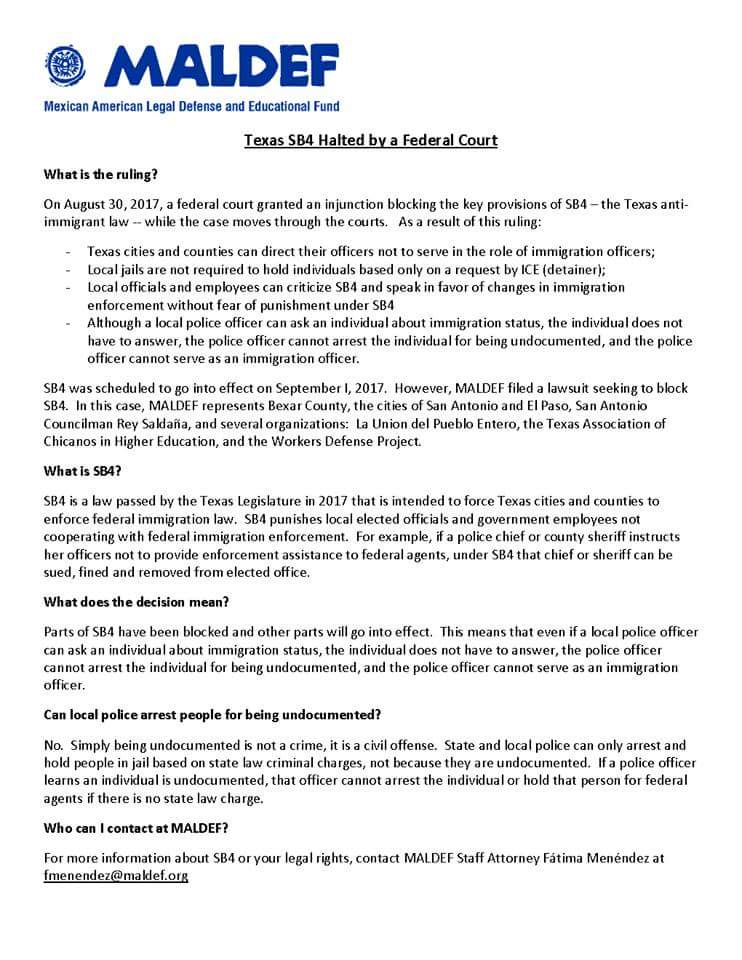