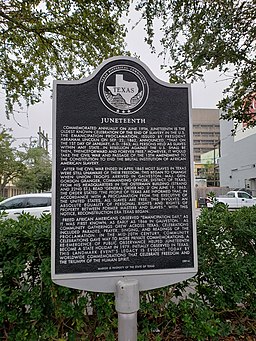 Why We Celebrate Juneteenth

Juneteenth, celebrated on June 19, is the name given to Emancipation Day by African Americans in Texas. On that day in 1865 Union Major-General Gordon Granger read General Order No. 3 to the people of Galveston. It stated:

"The people of Texas are informed that, in accordance with a proclamation from the Executive of the United States, all slaves are free. This involves an absolute equality of personal rights and rights of property between former masters and slaves, and the connection heretofore existing between them becomes that between employer and hired labor. The freedmen are advised to remain quietly at their present homes and work for wages. They are informed that they will not be allowed to collect at military posts and that they will not be supported in idleness either there or elsewhere."

Large celebrations on June 19 began in 1866 and continued regularly into the early 20th century. African Americans treated this day like the Fourth of July, and the celebrations contained similar events. In the early days, Juneteenth celebrations included a prayer service, speakers with inspirational messages, reading of the Emancipation Proclamation, stories from former slaves, food, red soda water, games, rodeos, and dances.

The celebration of June 19 as Emancipation Day spread from Texas to the neighboring states of Louisiana, Arkansas, and Oklahoma. It also appeared in Alabama, Florida, and California as African American Texans migrated.

Celebration of Juneteenth declined during World War II but returned in 1950 at the Texas State Fair Grounds in Dallas. Interest and participation fell away during the late 1950s and 1960s as attention focused on expansion of freedom for African Americans. In the 1970s Juneteenth revived in some communities. For example, in Austin the Juneteenth celebration returned in 1976 after a 25-year hiatus. Texas House Bill 1016 passed in the 66th Legislature, Regular Session, declared June 19, "Emancipation Day in Texas," a legal state holiday effective starting in 1980. Since that time, the celebration of Juneteenth continues across the state of Texas with parades, picnics, and dancing. Find out more at the Juneteenth article in the Handbook of Texas from the Texas State Historical Association.